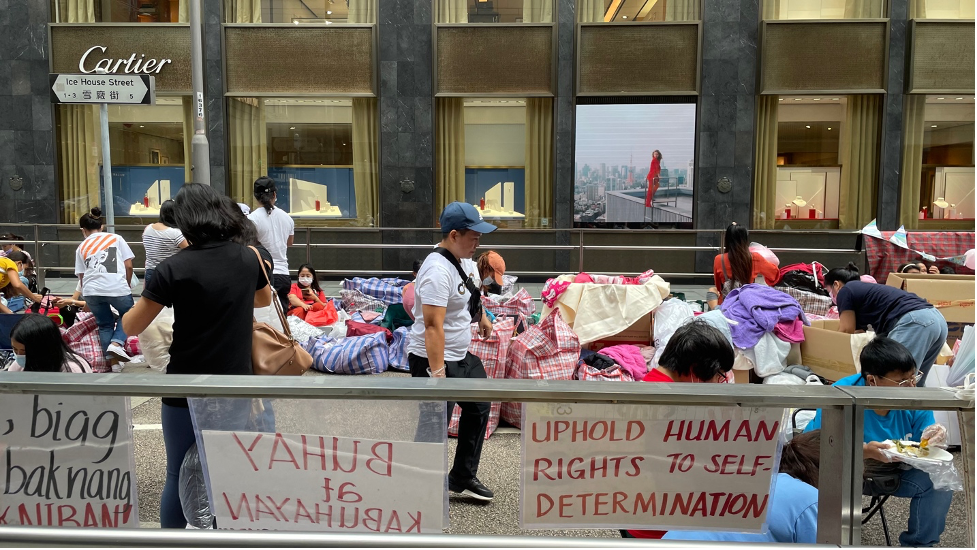 Domestic helpers gather on a Sunday afternoon in Central, Hong Kong. Many like to spend their only day-off here with friends. Photo by Yang Yaqi.

On a chilly Sunday afternoon in December, thousands of foreign domestic helpers gather in Central, chatting, sharing food, packing stuff into the red and white or blue and white plaid woven bags and playing lively music through mobile phones or speakers. Occasionally, one or two will jump up and dance, recording for their social media accounts.

For most foreign domestic helpers in Hong Kong, Sunday is their only day-off. Many spend the day with their peers outside: on the lawns of public parks, the bridges of Mong Kok, the streets of Central, Causeway Bay or Tsim Sha Tsui or near Victoria Harbour. They share home-cooked meals, chat, sing, dance and make videos together.

Among them, a woman in a khaki coat and dark jeans with a bright red wool hat wrapping her head sits on the pavement in front of a Prada shop in Central, with a board reading, “Stop Stigmatization On MDWS,” referring to migrant domestic workers, stuck to the handrail behind her. She smiles, eats bread and chats to the three other domestic helpers around her.

Rosalene Gudchar, or Zhalyn as called by her friends, is a 45-year-old Filipino domestic helper in her third year in Hong Kong.

She has good news to share — next month, her monthly salary will be increased by HK$1,000, making it HK$5,630 per month, as she’s working extra in looking after two children while her contract says she only needs to take care of one.

There are about 400,000 employed in Hong Kong — mostly women from the Philippines and Indonesia, who look after children and the elderly, clean and cook — amounting to almost 10% of the city’s total labor force.

They play a crucial role in the city’s society and economy, but many say their rights are largely limited or neglected. And the pandemic has exacerbated their struggle. 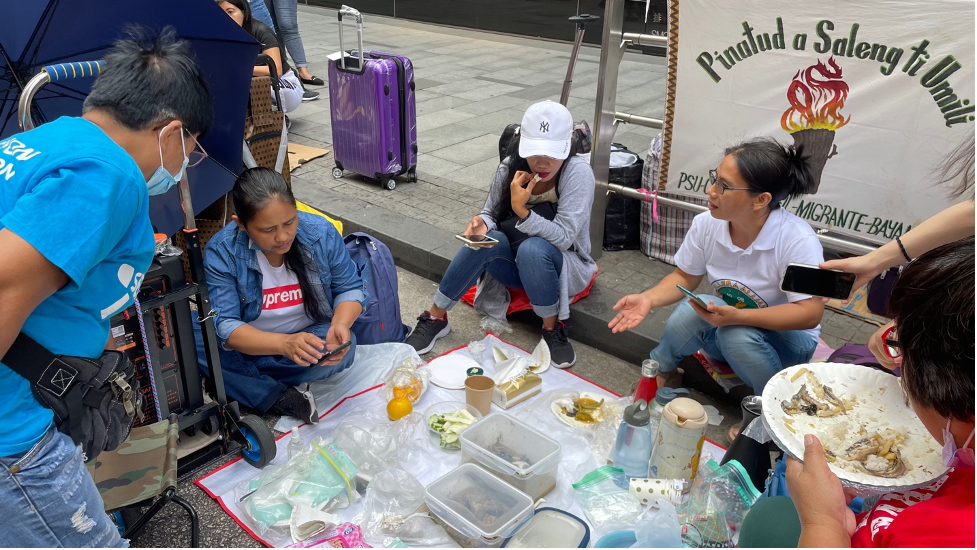 Zhalyn (in white), chairwoman of local NGO Pinatud a Sleng ti Umili, chats while sharing food with a few other domestic helpers. This is where they normally gather, sometimes holding events, sometimes just hanging out with each other. Photo by Yang Yaqi.

Jota, a 56-year-old Filippino domestic helper who’s only willing to give her nickname for job security reasons, earns HK$4,630 a month, even though she’s been working in Hong Kong as a domestic helper for more than 20 years. She’s been working for the same family the entire time, and the child she helped raise is now studying at university in Sydney.

By comparison, the minimum wage for local workers is HK$37.5 per hour, about HK$6,000 a month for a 40 hour a week job. But domestic helpers work all day, six days a week, much more than 40 hours.

The pandemic has created a shortage of domestic workers in the city. Many have difficulty getting here because of flight cancellations or bans, vaccination requirements and a shortage of quarantine hotels. The government started opening rooms in its government quarantine center for foreign domestic helpers, who need to quarantine for 21 days, but they are booked within minutes of release.

“It’s just like HK$50 or HK$20 increase,” said Fish Ip, Regional Coordinator (Asia) of the International Domestic Workers Federation. “It does not reflect the shortage actually.”

The city started to admit foreign domestic helpers in the 1970s to alleviate the shortage of local live-in domestic helpers, which has since freed local women from housework and childcare, allowing them to enter the workforce and contribute to the city’s economic growth.

And foreign domestic helpers contribute to 3.9% of the city’s GDP, according to services company Experian and NGO Enrich in 2019.

The demand for foreign domestic helpers is expected to continue to grow, with reasons including the aging population, lack of affordable childcare facilities, high work demands and low entrance limitation, said experts.

The government predicted the number of foreign domestic workers to increase to 600,000 by 2047.

The growing demand for domestic workers is also shared by lower-middle class families. Nearly one-fourth of employers are from lower-income groups, meaning with a household income below HK$40,000 per month and an apartment of less than 480 square feet, reported Adam Cheung, an assistant professor of the Department of Sociology at Hong Kong Baptist University, in a recent study. Some of them are blue collar workers, Cheung said.

Over the years, many domestic helpers have reported grim conditions, restricted freedom and even abuse.

The most prominent case of mistreatment was Erwiana Sulistyaningsih, the then 23-year-old Indonesian domestic helper who suffered from months of abuse between May 2013 and January 2014 by her employer Law Wan-tung.

Law was convicted for behavior including putting a metal tube from a vacuum cleaner into Erwiana’s mouth, injuring her lips, spraying cold water on her when she was naked and then forcing her to stand in front of a fan for up to two hours.

Law, then 44, was sentenced to six years in prison in 2015 but was released after serving half of the term. She recently announced bankruptcy, but has not yet paid the court-ordered damage fees.

“And the government, particularly the labor department came under an extreme amount of pressure to do something about it,” he said.

Changes have happened since. For instance, it’s less likely for helpers to get paid less than the minimum wage or to have days-off completely stripped out, Godden aid.

But the problems have far from been solved.

By law, foreign domestic helpers are entitled to have a continuous period of at least 24 hours every 7 days as their rest days. But in practice, it’s common for employers to illegally ask helpers to work in the morning on their day off and be home before 8pm, according to various sources.

Zhalyn said when she was working for her first employer in Hong Kong, she worked from 5:30am until 10pm every day. That’s a 102 hour work week.

The pandemic has made a bad situation worse, especially last year, said Fish. Working from home added an extra burden on domestic helpers, especially when some employers worried about COVID-19, requested extra cleaning.

Zhalyn, the chairwoman of Pinatud a Saleng ti Umili (PSU), an NGO aiming at empowering Filipinos from the Cordillera Region and elsewhere, said before the pandemic, when they held events in Central, there used to be more than a dozen of participants, but now there are just a few. She said many are not allowed to go out or to go to Central.

Fish said last year, she had a case of a domestic helper who was fired for leaving the house on her day off. Her employer threw all her stuff in the corridor outside the apartment door, accusing her of potentially catching the COVID-19 virus.

Most problems reported by foreign domestic workers can be sourced to two main chains: the live-in policy and rules on contract termination.

In 2003, the Hong Kong government passed a law which prohibits all foreign domestic helpers from living outside of their employer’s home. Violation of the rule can lead to a maximum fine of HK$150,000 and imprisonment of 14 years.

“It puts the domestic workers in a very difficult position if they wish to leave an abusive employer,” said Godden. “Because they have nowhere to go.”

Even employers might not necessarily want the live-in arrangement, especially lower-middle class families, said Cheung. “Sometimes they will say, ‘My apartment is small and I really don’t want to live with strangers.’”

But last February, the High Court threw out the second judicial challenge to the live-in rule, in which Yvette Dingle Fernandez and her daughter, Eloisa Valerie Fernandez, applied for judicial review of officials’ refusal in 2019 to grant a waiver of the live-in requirement in her case, after her employer insisted she live in her workplace and apart from her newborn.

A government spokesman reiterated the government’s stance that the live-in policy was related to “the long-established policy that priority in employment should be given to the local workforce”, according to the SCMP.

Another government regulation foreign domestic helpers say restricts their freedom is the law that they are unable to legally terminate their employment contracts without a “valid” reason, which includes not being given suitable accommodation or not being allowed to sleep an appropriate number of hours.

“We have to write a diary of what is happening everyday inside the house,” said Jota. “Because this is the evidence.”

The government says the law restricts “job hopping”. Recently, the Immigration Department turned down 1,332 visa applications from domestic workers suspected of switching employers without a valid reason in the first nine months of 2021, up fourfold from last year, as reported by the SCMP.

Previously, the time window for domestic helpers to look for new employers was two weeks. The government has expanded it to four weeks because of the pandemic and is accusing domestic helpers of “abusing” the new arrangement to conduct “job-hopping”.

“The Immigration Department characterizes it as so-called ‘job-hopping’, but actually what they are referring to is just freedom of movement,” said Godden. “They present this as a problem, but actually it’s not really a problem. It’s just a free market.”

“What the Immigration Department is doing is trapping people in abusive jobs where they are poorly treated. And this unfairly benefits the bad employers against the wellbeing of the domestic workers,” he said.

“You are telling them you must stay in your two-year contract, no matter what happens. You are silencing abuse and exploitation that may be suffered by the migrant domestic workers,” said Fish.

But some foreign domestic helpers say Hong Kong is still a better choice compared to their home countries, where jobs are difficult to be found and largely underpaid. That means women here often carry the financial burden of the whole family.

Jota, who came to Hong Kong in 2000, left her husband and three children at home. Her youngest son was only 4-years old at the time.

Separated from the family for more than two decades, Jota said she’s still in a close relationship with them. She has calls with her husband and kids almost everyday.

The domestic situation of the Philippines left women like her no choice but to be forced to migrate, she said.

During Jota’s years in Hong Kong, she paid for her three children’s tuition fees and her husband’s multiple surgeries. Now in her 50s, Jota said she has to continue working here to pay for her son’s medical consultations and therapies.

Zhalyn, meanwhile, said she is supporting a family of five: her mom, children and her older sister, who lost job during the pandemic and is now looking after Zhalyn’s children. She sends most of her salary back home, only keeping HK$600 for herself out of her HK$4630 monthly salary.

Both Jota and Zhalyn have not seen their family members since the pandemic started.

But Zhalyn said they are still fighting, both for a possible brighter future in the Philippines, and also for their own rights in Hong Kong. Zhalyn said she is fighting for a minimum wage of HK$6,100 a month, which is just enough to cover her spending. She said ideally she would expect foreign domestic helpers to have the same minimum wage as local workers.

“Even if we work as domestic helpers here abroad, we still have rights to protect,” said Zhalyn.

And Jota said she wishes the Hong Kong government would see foreign domestic helpers as citizens, “not as slaves.” 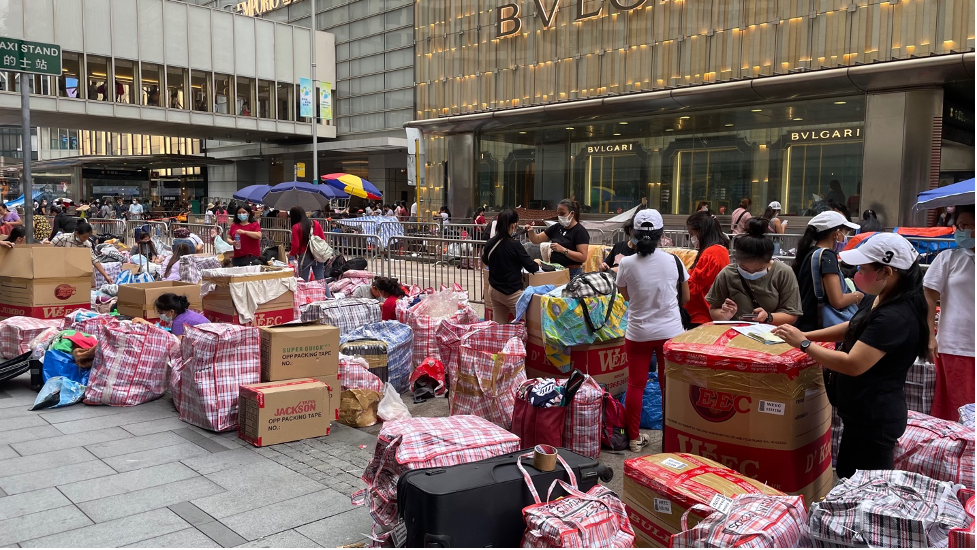 Thousands of foreign domestic helpers gather in Central on Nov.7, packing stuff to send home for Christmas and the New Year holidays. Photo by Yang Yaqi.

They have nowhere to go.

END_OF_DOCUMENT_TOKEN_TO_BE_REPLACED 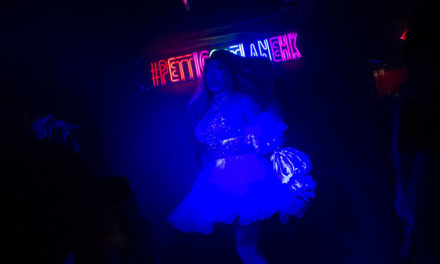 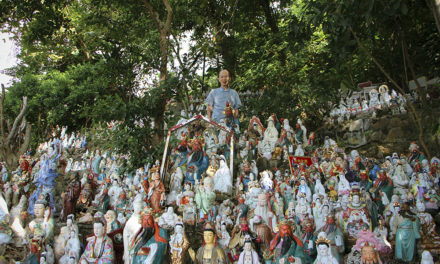 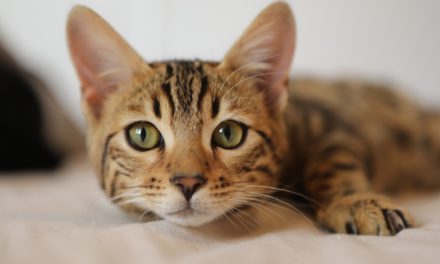